Recently, the elected District Attorney for Carbon County did the ethically correct thing (more or less).

It appears as if the National Patent Analytical Systems DataMaster DMT units that were positioned in the Lehighton Barracks between October 25, 2011 and June 22, 2012 were not maintained appropriately. 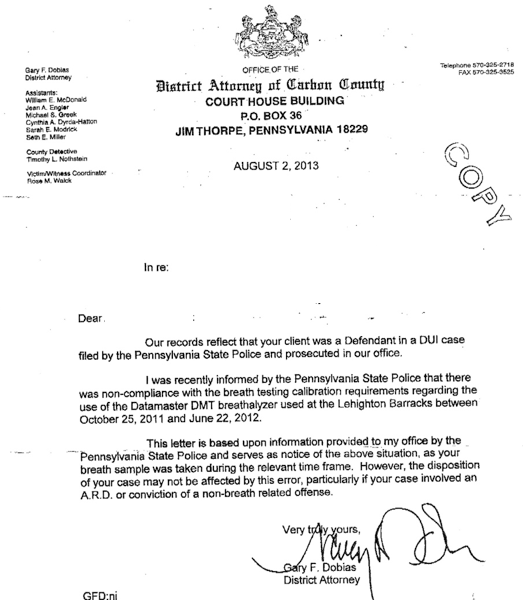 This type of event further highlights the continued need to abandon the 1950s technology of BrAC testing and joined the civilized world by abandoning error prone BrAC testing in favor of proper blood testing.

I do respectfully take issue with the DA’s last sentence which is not wholly accurate and borders on giving legal advice.

If you are a CDL driver and went through ARD for a DUI, then you can be subject to massive sanctions and above and beyond the ARD sanctions. Also even though someone completed ARD, unless the conviction is vacated, the disposition stands. This means that the next DUI conviction will count as a second offense under Pennsylvania’s recidivist sentencing scheme in 75 PaCSA 3804. Dangerous.