After reviewing countless wrongful conviction cases, it has been pr 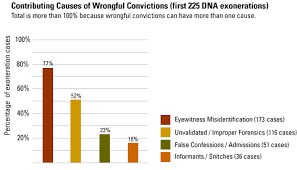 oven by DNA evidence, that eyewitness identification is frequently inaccurate. Eyewitnesses do not clearly remember who they saw perpetrating the crime. It happened too fast, or it was dark, or they have a bias that leads them to a mis-identification. Research shows that the human mind is not like a tape recorder. We neither record events exactly as we see them, nor recall them like a tape that has been rewound and the memory can be contaminated.
A classic case in eyewitness mis-identification was that of Shareef Cousin who was the youngest person to be on death row at the age of 16 for the 1996 Louisiana murder of Michael Gerardi. The only person who was accompanying Gerardi was Connie Babin, who admitted to the police that she could not identify the murderer because she was not wearing her glasses at the time of the attack. By the time the case was in court, she said she was absolutely positive that Mr. Cousin was the murder. Logistically, there was no way that Mr. Cousin could have committed the murder because he was videotaped playing in a basketball game at the time of the murder. But based on Connie Babin’s mis-identification Cousin was was sentenced to death. Four years later Cousin was exonerated of all charges.

To date fourteen states have made eyewitness identification reform procedures part of their standard practice. This includes lineup composition, statement of level of confidence by the witness, blind administration (where the cop offering the lineup is unaware of who the suspect is), and fillers in the lineup who look like the suspect. 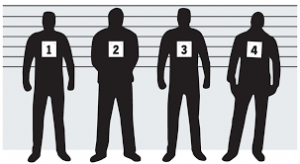