We are a society of laws.  Laws give us order and justice.  It is a hallmark of a democratic society. 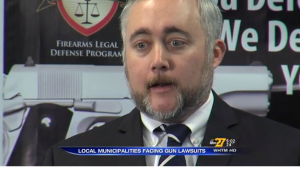 The State Legislature of Pennsylvania has laws which state that gun and ammunition laws can only be made by the Commonwealth, if they differ from that which are now part of state law.  Municipalities do not have this authority.  This is similar to motor vehicle laws.  Motor vehicle laws can only be made at the State level to ensure uniformity.  This is important so that people do not become accidental criminals.  For example, if a municipality passed a law that cars should drive on the left side of the road, a driver may not know that ahead of time and thus get ticketed.

You can cross from one municipality to another in a matter of seconds.  That is why it is important that gun laws are also made at the State Level.  Unfortunately, Harrisburg has enacted a number of gun laws which differ from the state law, despite the fact that this is illegal.  Harrisburg simply does not have the authority to make gun laws at the municipal level.  If they feel that specific laws are needed, it needs to be sent to the State Senate and signed by the Governor.

Recently, U.S. Law shield sued the City of Harrisburg over its illegal gun laws.  Attorney Justin McShane is leading the legal effort in this matter.  This has been widely covered in the press which you can see at http://www.themcshanefirm.com/harrisburg-sued-illegal-gun-laws/ .