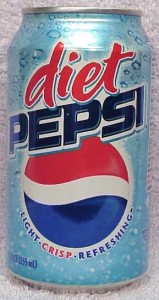 There is a lot of science behind how the body processes ethanol.  When other substances are also present in the system, chemical reactions can occur which can cause higher blood alcohol levels.

Researchers have discovered that drinks mixed with diet soda cause blood alcohol readings which are up to 18% higher than those with normal sweeteners.

People who drank vodka with a diet mixer had breath alcohol levels 18 percent higher than when they drank alcohol with full-calorie soda. Sophie Bushwick reports

Diet soda may help or hinder attempts to lose weight. But it definitely can get you drunker. Because a drink made from alcohol and a diet mixer boosts breathalyzer readings higher than the same drink with a sugary mixer. The finding is in the journal Alcoholism: Clinical & Experimental Research. [Cecile A. Marczinski and Amy L. Stamates, Artificial sweeteners versus regular mixers increase breath alcohol concentrations in male and female social drinkers]

For the study, 16 casual drinkers knocked back one of three drinks: vodka mixed with sugary soda, vodka mixed with sugar-free soda, or a placebo. Over three different sessions, each participant got each drink. After the drink, the subjects were given breathalyzer tests and reaction time measurements. Participants also did a self-assessment where they estimated their own drunkenness, tiredness and willingness to drive.

When both men and women drank vodka with the diet mixer, their breath alcohol levels were on average 18 percent higher than when they consumed the alcohol with full-calorie soda. And their reaction times were slower.

Although a diet mixer impaired the subjects more, they rated themselves as not being any drunker. So if you’re watching your weight, watch out for what you drink.