As of January 1, 2014, the state of Colorado became the first state to legalize marijuana possession and recreational use under certain circumstances. People can now buy marijuana like alcohol. If you are 21 or older, you can buy up to an ounce at a licensed store, as long as you have a Colorado ID. If you are 21 or older, people from outside Colorado can buy a quarter ounce. An ounce is reported to cost about $200 or more. You cannot smoke out in public but only in appropriate places.

Colorado is the first state to do this. It is the first place in the world that marijuana is regulated from seed to sale. It is a booming industry. We are barely a week out of it being available. The estimates are that initial sales are in the millions. State officials here anticipate that marijuana sales will generate some $67 million in annual tax revenue. It is projected to be one of the largest industries in the state.

I recently came across and interesting image someone shared with me that shows where it is available in the state: 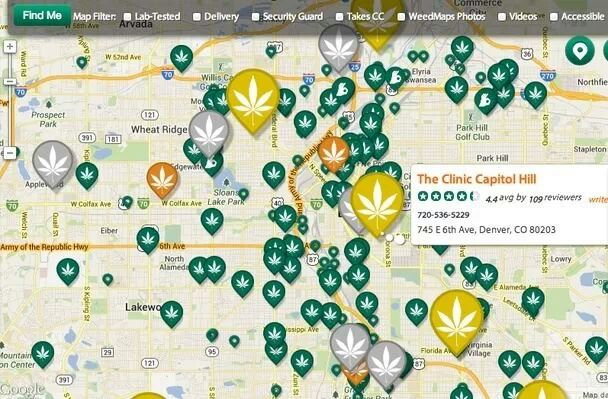 It is everywhere. The state anticipates an uptake in “marijuana tourism” where people visit the state and then use marijuana while there. Then, they return to their state.

The short answer is no for people who want to drive in Pennsylvania.

What you need to know about marijuana.

The parent drug in marijuana (cannabis) is Delta 9-Tetrahydrocannabinol (THC). When used, the parent drug is then transformed by the body into what scientists call metabolites. These metabolites include mainly to 11-OH-THC and it is further oxidized to another metabolite known as 11-nor-9-carboxy-THC (THC-COOH). In humans and animals, more than 100 metabolites could be identified, but 11-OH-THC and THC-COOH are the dominating metabolites. Both THC and 11-OH THC are impairing and are short lived in the body. They are in and out in hours. On the other hand, THC-COOH is the inactive metabolite and can be detected for months after last use. (For more information on the technical reason why it lasts in the body and why it matters, please see: Why per se Driving Under the Influence of Drug Based Prosecution is Not Scientific and How Probation Violations for Marijuana Use May Be Wrong)

What you need to know about Pennsylvania law.

Under both federal and Pennsylvania State law, marijuana is classified as a Schedule I drug. In Pennsylvania, it is illegal to possess. It is an ungraded misdemeanor. A conviction for Unlawful Possession of a Small Amount of Marijuana has a maximum sentence of 30 days in jail and a maximum fine of $500. However, the conviction carries with it a loss of your rights to drive in Pennsylvania for six months. There is no way to get a restricted license such as a probationary license or an Occupational Limited License (OLL), which is sometimes called the Bread and Butter License. Even if you legally buy your marijuana in Colorado, you cannot keep it here in Pennsylvania. It is contraband and you will be subject to prosecution that includes losing your driver’s license if you are caught and convicted.

What is not so obvious is what happens if you legally smoke marijuana in Colorado and then fly home?

Unless you have a private jet, getting back and forth from Colorado by air never takes less than about 6 hours. Remember, in Colorado, you cannot smoke in public. So you would have to smoke, get a ride to the airport (because marijuana-impaired driving is still illegal in Colorado). Get your bags and go through security. Then there are delays or connections or other points of diversion of even the best travel plans. Then you have to land, deplane and get your bags. I have flown from DIA to MDT many times. Six hours is about average from door to getting my bags.

Pennsylvania DUI laws make having ANY detectable metabolite of a Schedule I drug in your system when you drive illegal. This includes that non-impairing metabolite THC-COOH, Remember as we wrote above, THC-COOH can last in your system for months after taking marijuana.

The prosecution will argue that it is not a defense to Pennsylvania DUI laws that you legally smoked marijuana in Colorado and that only the inactive metabolite remains. We here at The McShane Firm are looking to challenge that, but do not have the right case to do so yet.

If you have a marijuana DUI case due to any circumstances, not just these, please contact us here at The McShane Firm, LLC. We would be happy to help.