DUI Checkpoints will be setup on roadways in Central Pennsylvania this weekend. Yet another waste of resources on a tactic that does nothing but inefficiently enforce the law. If you are serious about drunk driving enforcement, you do roving patrols. They are repeatedly shown to be more effective and a lot more efficient. Static roadblocks (DUI checkpoints) are nothing more than inefficient tactics that harass innocent law abiding people, including lawfully socially responsible drinking drivers, into fearfully embracing a neo-prohibition agenda of: don’t drink and drive. They are a wonderful means of generating revenue for the officers involved, who frequently got overtime and “court time” for non-DUI enforcement traffic or equipment tickets, and for municipalities and states when they issue nuisance tickets. 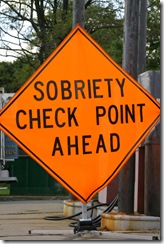 In an effort to frighten would-be drunken drivers into acting responsibly at Halloween-themed parties this weekend, DUI checkpoints will be set up on three roadways in the midstate.

Funded with federal highway safety grants through the Pennsylvania Department of Transportation, the Center for Traffic Safety will run three checkpoints on three separate, unannounced roadways in York, Lancaster and Adams counties from Friday through Sunday, according to a press release issued Wednesday.

The checkpoints will begin around 6 p.m. Friday and will run continually until 6 p.m. Sunday, according to the release.

As always we ask you to make safe and wise decisions.  Before you go out, please remember to read our blog post:

5 Ways to Avoid a DUI (After Getting Pulled Over)

If you have any questions and need to talk to an attorney, please call 1-866-MCSHANE.  Our lines are open 24/7.