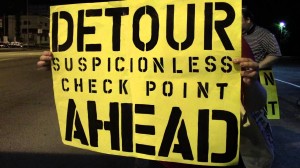 MADD and other drunk driving lobbies lobby the government to release millions of dollars worth of grants to police departments to carry out drunk driving initiatives.  The departments, in turn, set up roadblocks to arbitrarily stop drivers.  For example, it has been noticed that police officers camp out at a certain point and stop drivers for bogus petty charges like sticker violations.  The intent is to create a de facto  secret checkpoints where they can investigate drivers while circumventing the Fourth Amendment protections against arbitrary and capricious roadblocks.  They may pull you over for “rolling at a stop sign” or “weaving” which are quite arbitrary and depend solely on the opinion of the officer.

In America, we do not have “prove that you are not a criminal” roadblocks.  They are morally wrong.  Police officers must have reasonable suspicion to pull you over except for these total waste of resources checkpoints. Even the sobriety checkpoints which are conducted by law enforcement have specific laws governing where they can be setup and what notice must be given to drivers.  They must be clearly marked and visible.

One of the big problems with all of this is that no one is talking about it.  This all becomes justified by one or two DUI or drug arrests which are produced with many hundreds of innocent people caught up in the net.  However, the ends does not justify the means, especially when the means is a direct assault on our constitutional rights.