One of the problems in DUI and other criminal cases are mandatory minimum sentences.  Even if the circumstances of the case warrant some leeway, judges find their hands tied in these situations. 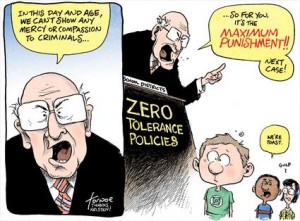 One example I like to give is with school expulsions.  When I worked on the Central Dauphin School Board,  I noticed many parents pushing for “zero-tolerance” measures when it came to school yard fighting or “weapons.”  The measures would make it so any student who threw a punch at another student would be expelled from school for the remainder of the year. On the other end, kids who brought guns to a school were treated the same as those who were in Boy Scouts and accidentally brought their pocket knife to school in their messy school bag that they used that weekend too for a campout.

The interesting and sad part was, that on more than one occasion, the same parents who argued in favor of the stricter measures were pleading for leniency when their child was on the wrong side of the rule.

The truth is, school yard fights happen and intentional accidents or unthinking unwise decisions happen.  We should strive to prevent them in the first place.  However, discretion should be used in punishing those children taking into account their prior disciplinary record and the severity of the action as well as intent.  It is the sensible and humane thing to do.

The same holds true for many offenses including DUI.  Very few people deliberately and with a depraved heart purposefully and deliberately plans to drive drunk.   It is normally the result of bad planning and momentary poor judgment.  While there is no excuse for putting people’s lives in danger or drunk driving, wouldn’t it sensible to take into account the driver’s previous criminal history and the circumstances surrounding the case, and the intent?

Mandatory minimums don’t allow for this type of discretion.  The judge is bound by the written law which means common sense is done away with.