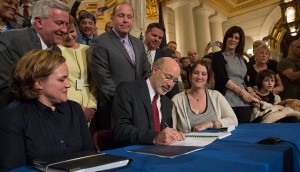 Governor Tom Wolf of Pennsylvania signed the Medical Marijuana Bill on Sunday April 17, 2016 making PA the 24th state to legalize medical marijuana. This comes after after a 2 ½ year journey for adults and parents of children who see medicinal value in using marijuana to treat illnesses. Finally on Wednesday, April 13, the PA State House approved 149-46, the legislation presented by both sides.

It will take about 18-24 months for the program to get up and running to enable dispensal of medical marijuana to patients. Then doctors will be able to prescribe marijuana to treat 17 medical conditions such as cancer, epilepsy, PTSD, autism, and assorted neurological and gastrointestinal disorders.

Advocates Lolly Bentsch and Dana Ulrich also credited the advocates for doing their part. “This whole process has been long and torturous and it seemed like it was just never going to end. And it was tear-filled and it was heartbreaking because we lost people along the way but we had each other,” Bentsch said, as her voice cracked with emotion. “Had it not been such a long journey, had it not felt like torture at times, today wouldn’t be nearly as special.” Read more