Despite many states legalizing the use of medical marijuana, the federal government still considers marijuana a Schedule I substance which makes possession of it completely illegal.  Furthermore, promises to remove some of the procedural red tape which has been making it difficult for legal dispensaries to operate have not been fulfilled. There are also many rules which make it difficult for medical researchers to study the benefits of cannabis. 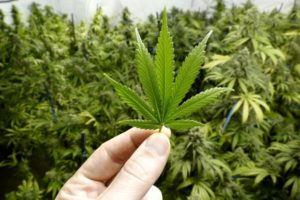 Few if any industries are growing at a quicker and more consistent pace in the U.S. than marijuana. A report released earlier this year by Marijuana Business Daily entitled “Marijuana Business Factbook 2017” found that the U.S. legal-weed market is expected to grow by 45% in 2018, and an aggregate of 300% between 2016 and 2021. If these projections are accurate, we could be talking about a $17 billion market by 2021. With growth like this, it’s no wonder why marijuana stocks have gone through the roof in recent years.

But at the same time, the federal government has hardly adjusted its stance on marijuana. The drug remains a Schedule I substance at the federal level, meaning it has no recognized medical benefits, and is deemed to be completely illegal, right alongside LSD and heroin.

This scheduling has also made life difficult for marijuana-based businesses. For example, most are unable to access basic banking services, ranging from a line of credit or loan to something as simple as a checking account. That’s because banks answer to the Federal Deposit Insurance Corporation, a federally created entity. Since pot is illegal at the federal level, it’s always possible that banks could face money-laundering charges or fines for providing financial services to pot businesses.

If there’s been one small victory for pro-legalization enthusiasts at the federal level, it was the announcement from the Obama administration in 2016 that it’d be removing some of the red tape that keeps researchers from examining the medical benefits and risks of cannabis. In particular, the new policy on medical-cannabis research was designed to allow other universities, aside from the University of Mississippi, which has been the only authorized cannabis grower for the federal government since 1968, to grow medical cannabis. Ending the University of Mississippi’s monopoly and introducing new supply was expected to be a boon to the research industry.

Or so everyone thought.