In Pennsylvania, Implied Consent means that you agree to submit to a chemical test if you are ever asked to do  so by a police officer.  When you go to renew your driving license, it is one of the forms you will have to sign.

It is known by a couple of different names:  the DL-26 form, the O’Connell Warnings and the Implied Consent warnings.

The police are required to read this to you when they ask you to submit to a breath or blood test.  Why?  Because a refusal to submit to a DUI test carries with it, upon satisfactory proof, at least a 12 month license suspension, just for the act of refusing.  Under certain circumstances, the loss of license can be as much as 18 months.  This is "free and clear" of the outcome of the criminal case.  In other words, you can get a not guilty from the criminal prosecution, but the license loss due to a refusal will be left unaffected.  If that same person who was adjudged to be a refusal is found guilty of a DUI on the criminal side, they face another subsequent 12-18 month suspension plus mandatory jail time.  Even if you would have been charged at a lower tier because your BAC was not in excess of 0.16, a refusal is charged at the highest tier possible.

However, despite these severe consequences, Pennsylvania doesn’t care if you understand the waiver that the officer is reading:

Should police be required to explain alcohol test in language of suspect?
A New Jersey Supreme Court decision overturning a drunken driving case because the driver did not speak English could affect Pennsylvania motorists and police. 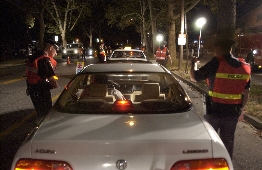 This article shows some of the evident hypocrisy in Pennsylvania DUI law. On one hand, the officer is required to read the waiver to you to make sure you understand the consequences. On the other hand, they don’t have to make it available in Spanish even in areas where there is a majority Latino population?!  So what do the Pennsylvania Courts have to say about this?

An appellate case was argued over this very apparent discrepancy.  The law in Pennsylvania is hypocritical.  The law requires proof that the person who refused made a knowing, intelligent and voluntary decision to refuse; yet, the law has no requirement that the listener be provided the chemical warnings in his/her own native language.  In other words, Pennsylvania Courts have de facto held that the English language is the lawful official language in Pennsylvania.  Those who do not speak it are held liable for not knowing the de facto official language, the English language.  The court ruled that, under implied consent, anything short of submitting to testing is deemed a refusal. The Pennsylvania Supreme Court even refused to hear the appeal.

This holding flies in the face of Pennsylvania history.  In 1837, the Pennsylvania legislature passed a law which required schools to provide instruction in different languages, establishing the first ever bilingual education law.

This lunacy is exclusively reserved for DUI and driver’s licensing cases.  For example, if English only speaking police officers came to a house that had Spanish only speaking residents and asked in English if the residents would consent to a warrantless search of the house their search, any such consent would be totally invalid.  If the police and prosecutors tried to argue that the consent was valid, they would be laughed out of court.

Remarkably, it seems as if appellate courts forget that a chemical test of one’s breath or blood is a search.  But, it’s not just any search.  It’s a search of one’s body.  It’s an invasion of one’s bodily integrity by the government.

Isn’t it amazing how a house or a car gets more protection than our bodies?

Is it really that difficult to keep a copy of the waiver in Spanish?  For a long time, AT&T has kept a special line that was available 24/7 free for police agencies to facilitate translating a wide range of languages. There may be a number of people who do not understand English well enough to comprehend the severe consequences they may face.  But one DA and the state don’t really care:

But, [the DA] warned, voluntarily agreeing to provide Spanish-speaking interpreters for DUI arrests could become a slippery slope.

"What’s next, bilingual signage on our highways?" he asked.

I find that to be an utterly ridiculous and callous statement.  It is at the very least ethnocentric.  At the most it’s racist.  The whole reason that road and safety signs have shifted to symbols instead of text is so that people of all languages and educational levels can understand them.  In fact, it makes our roads safer.

Furthermore, the language used in the Implied-consent Warnings is remarkably complex even for native English speaking non-lawyers to understand.  This is the exact language that is supposed to be read is:

So remember friends if even you don’t understand what the officer is saying, it doesn’t matter.  It counts as a refusal.  So sad.  At the McShane Firm, LLC we are litigating this issue anew to try to get common sense, fair and non-ethnocentric rulings that reflects our society and not xenophobia.

4 responses to “Implied Consent: It Doesn’t Matter if You Don’t Understand”