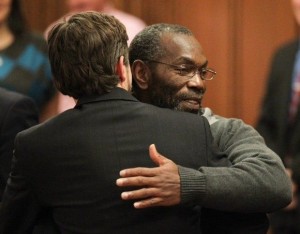 On May 19, 1975 Harold Franks was brutally murdered during a robbery in Cleveland.  Based on the hearsay testimony of a 12 year-old boy, police arrested 18-year-old Ricky Jackson, 17-year-old Ronnie Bridgeman, and Bridgeman’s 20-year-old brother Wiley.  None of them had a previous criminal record.

What happened after that is the most horrific, callous, and cruel trail of events that only could be perpetrated by the police.  The boy Eddie Vernon wanted to recant his statement, but the police threatened that his parents would be arrested if his backed out.  They knew he was not an eye witness to the crime.  They knew that they get away car belonged to another suspect (who’s police record included a robbery and shooting a year earlier).  They knew Jackson and the Bridgeman brothers were innocent.

All three were sentenced to death. If it was not for The Supreme Court suspending the death penalty, these men would probably be dead and long forgotten.

In 2013, due to the research by a brave journalist named Kyle Swenson, Vernon formally recanted his original testimony. Vernon revealed that police fed him the details of the crime. “I don’t have any knowledge about what happened at the scene of the crime,” he testified. “Everything was a lie. They were all lies.”’

On November 21, 2014, after serving 39 years, three months and nine days—the longest time in prison of any defendant exonerated in U.S. history, Jackson was released.

Earlier this month, Jackson filed a lawsuit against the officers who framed him.   Unfortunately, no amount of money can truly compensate him for the suffering he has endured.

You can read more about Ricky Jackson and many more innocent people who fell victim to a broken system at The National Registry of Exonerations and The Innocence Project.