The name Annie Dookhan has become synonymous with false fabricated forensics.  She is a personification of everything that is wrong with crime labs across the nation.

According to the New York Times: 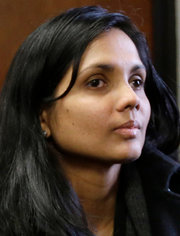 Ms. Dookhan pleaded guilty in 2013 to 27 counts, including perjury, obstruction of justice and tampering with evidence, and was sentenced to three to five years in prison plus two years of probation. Prosecutors said that during her nine years at a drug lab in Boston, where she processed drug samples seized from suspects, Ms. Dookhan failed to properly test samples before declaring them positive, mixed up samples and forged signatures and lied about her credentials. Ms. Dookhan’s lawyer said she was trying to be the best chemist on staff.

According to some estimates, up to 40,000 cases may have been tainted by her.

A recent ruling by Massachusetts’ Supreme Judicial Court, has cleared the way for many of these cases to be challenged.  The Court ruled that defendants who are granted a retrial cannot face heavier penalties than what they were originally sentenced to.

While this doesn’t undue the damage caused to the many innocent people who were convicted based on these atrocious acts, it does allow for these people to seek justice and closure in these cases.