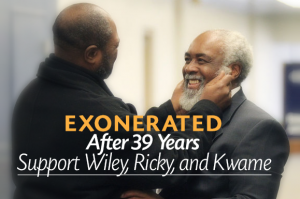 It’s a story we hear all too often.  A murder is committed and bad investigations and sketchy witness testimony lead to the wrong person going to jail.  We hear it and act like it’s just another story.  But it’s not.  Behind every story lies a severe human tragedy.  Decades of life lost.  Shattered dreams.  A bright future extinguished.  All because of a broken system.

Meet Kwame Ajamu who was recently exonerated for 1975 murder of a Cleveland money-order salesman named Harold Franks.  Ajamu, who was 17 at the time, served over 27 years in prison until we was released on parole in 2003.  Since then he has been working to rebuild his fractured life in a world far different from the one he had left behind.

Having just exonerated Kwame Ajamu, Judge Pamela Barker stepped down from the bench on Tuesday, leaned across the defense table and gave him a hug.

It had taken nearly 40 years, but Ajamu was no longer a convicted murderer.

Moments earlier, Barker had dismissed his charges and county Prosecutor Tim McGinty had conveyed a message through an assistant that Ajamu; his brother, Wiley Bridgeman; and their friend Ricky Jackson “have been the victims of a terrible injustice.”

The three had been convicted and sentenced to death in the slaying of a businessman outside on a corner store on a warm spring day in 1975. The case against them unraveled last year when the prosecution’s star witness recanted his testimony.

This story should serve to remind us all that the criminal justice system has some very big flaws and injustices like this happen far too often.