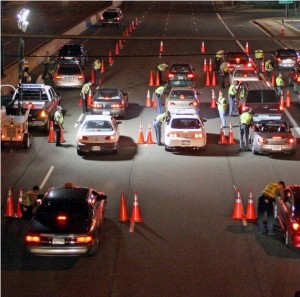 What if you put together a big huge party, but no one came? You’d feel pretty lame wouldn’t you??

DUI checkpoints are woefully inefficient.  This is a fact.  If you don’t believe me read this:

Burbank police were stationed at Glenoaks Boulevard just north of Alameda Avenue from 9 p.m. to 2 a.m., during which time six drivers were detained for field sobriety tests, said police Sgt. Darin Ryburn. None were arrested.

Two citations were issued – one for a driving infraction and another for driving without a license.

The Burbank Police Department last year received a $31,500 grant through the California Office of Traffic Safety to conduct sobriety checkpoints through September.

If the purpose of all of this is to keep drunk drivers off the road, then there are clearly better options.  Saturation patrols are proven to be much more efficient and cheaper to run than DUI checkpoints. This roadblock is not unusual in the rate of inefficiency. Data shows that they just do not work:

Data from other states confirm this finding:

However, the most important number is not the number of people stopped or arrested, it is the number of dollars received to run these checkpoints.  It’s all about politics and money my friends and not about public safety.

It’s time for us to understand that roadblocks are about money and not about safety.

Listen to a radio interview I recently did:

Mcshane Interview on DUI Checkpoints Radio Wlbr 6-5-2013-1 from The McShane Firm on Vimeo.