When it comes to the issue of forcing out a confession, has our criminal justice system evolved much from the days of the Salem Witch Trials, during which about 50 women were coerced into confessing to have performed witchcraft? Or are there still remnants of such methods of forced confessions in existence today?

Or what about the infamous case of the Central Park Five, when 5 Harlem youths were separately interrogated and intimidated by the police to falsely confess to the rape and severe beating of a woman jogging through Central park? They were all convicted in 1990 and 12 years later exonerated by DNA evidence, when the sole perpetrator was found and confessed.

Furthermore, police have even been found to coerce confessions out of persons with mental disabilities. For example in the case of Anthony Gray, who was convicted to two concurrent life sentences in 1991 for first degree murder and first degree rape. Maryland police had had pressured a confession out of Gray, who suffers from mental illness, where he incriminated himself and two other men by telling Gray that those men had already pointed fingers at him. Seven years later, he was exonerated by DNA evidence. Here is a copy of his heartfelt letter to the Calvert County judge.

False confessions involves self-indictment. This makes it one of the most confusing of all the causes 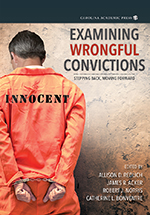 Why do innocent persons make false confessions to incriminate themselves?

The reasons go all across the spectrum from threat to torture. False confessions can happen when police interrogation tactics are physically or mentally tortuous, exhausting, or seemingly never-ending. A person may make a false confession when police suggest to the defendant that he or she “did it” using “what if” scenarios. Then there are tactics like, “we already have evidence against you,” or “so-and-so said you did it.”

Sometimes the innocent defendant may have a mental impairment or be under the intoxication of alcohol or drugs. They may confess for fear of violence, or the threat of a long prison sentence or simply the suggestion that he or she “will be able to go home” after confessing. Or the accused may believe that if they cooperate with the police they can be released after confessing and proving their innocence later.

The Innocence Project is seeking many types of reform into the Criminal Justice System, one of which is mandatory recording for interrogations. This record can prevent disputes about how a suspect was treated, and create a clear record of a suspect’s statements.