The recent events in Ferguson have once again brought to light the issue of police interaction with the public.  A culture of lack of training, lack of oversight and systematic arrogance have created an epidemic where the next Ferguson MO could be in your or my backyard.  While there are many very hardworking and professional police officers who are dedicated to keeping our communities safe, there are also many who abuse the power entrusted to them.

Not a day goes by where I do not see a police car or a state trooper car flat out speeding without their emergency lights on. I see them make illegal turns in clearly and prominently marked intersections that state no turns with no emergency lights on in complete defiance of the law. I routinely see police cars parked in handicap spots when there is no emergency. They use their cell phones to text personal messages while driving. All of these things are illegal, happen daily, and provide for the foundation of the “just us” system where police do as they please and enforce laws that they routinely disregard. It is these “little” violations of the law that happen on a daily basis that create a culture that police are above the law, not subject to the law, and can act in a lawless manner. It is small wonder that when big events happen such as the aftermath of Ferguson that we have police pointing guns at peaceful protestors with fingers on the trigger telling them to get back or they would shoot them in the fucking face. 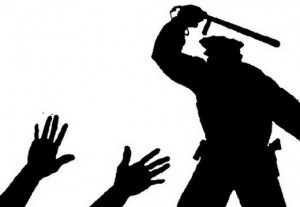 Police abusing citizens takes many forms.  An abuse doesn’t have to be a beating. Police abuse can take many forms.

For example, there are the extreme and well-documented examples of police officers planting drugs on suspects, lying on the stand to support a conviction, falsifying police reports, and taking suspects off camera or shutting off their cameras in order to do something illegal to a citizen.  These are real abuses.  Many of these citizens end up in facing a litany of penalties like jail, fines, license suspensions, higher insurance rates, and of course the public shaming of having their name in the local paper all for a crime they did not commit. These types of things cause people to lose jobs and can shatter someone’s family and ruin their future.

Then there are more “benign” forms of abuse such as not making a full and complete investigation and jumping to a conclusion. For example, a police officer administering roadside tests such as the Walk and Turn or the One Leg Stand test who fails to ask the motorist if he or she has any leg, back, inner ear or balance difficulties. The failure to ask is an absolute violation of the NHTSA training by the officer, and can lead to an inappropriate estimation by the officer that what he or she sees is due to drunkenness or being above 0.08 when in fact it could simply be a pre-existing medical condition where the motorist could not possibly perform those tests on his or her most gymnastic day. How about an officer who uses a Portable Breath Test within the 15-minute deprivation period and contra the equipment manufacturer’s published protocol? Without following at least that 15-minute deprivation periodsoctt, the officer could see a BrAC result that is over-reported by a lot and not reflective at all to what the motorist’s BAC is? What about the police officer who stops a motorist for a technical equipment violation (no bad driving) discovers someone behind the wheel who is clearly over 21 and asks no questions and simply smells and “odor of an alcoholic beverage coming from or about his/her person,” sees red/bloodshot/glassy eyes and arrests that person no questions asked when doing so contra the officer’s training? While some folks may think these examples are benign, I think not. How is it any different than planting drugs on an innocent person?

The solution is that we need more oversight and effective checks and balances as well as proactive actions such as better training and re-training for police.  Police who are dishonest should not go on paid leave and reinstated into another department, or worse yet simply get paid time off. Officers who routinely ignore their training or skip steps should not get promotions.

Communities and police need to work together in positive and transparent ways.  In many places where we get back to our roots of policing, meaning the police are there to protect and serve, crime rates have gone down and so have complaints against police departments.  The police play a vital role in insuring the safety of our families.

I am very happy that police exist. I depend on them for my personal safety and that for my family. The problem is that less and less people trust the police. When they see a trooper clearly speeding on the highway and tailgating them to get them to move over so they can move at breakneck speed with no emergency lights on, it invites unwanted skepticism.

The hallmark of a democratic nation is a law and order system based on trust and justice.  Unfortunately, the acts of a few bad apples have caused citizens to lose trust.  The other problem is that the bad police do not wear a sign on their chests that reads “I am a bad police officer. Beware.” As a result, people are very very skeptical of police.  It is time to all work together to correct our problems and grow as a society.