In our final installment of “How to Find a DUI Lawyer in Pennsylvania”, we will complete our analysis of the criteria and qualities you should consider when choosing a lawyer to  fight your DUI case.  The lawyer you choose should be:

And finally be qualified enough to lecture about DUI issues in advanced legal seminars.

Question #5: Do you regularly speak at legal seminars about advanced DUI issues?

In the legal field, there are many different associations and organizations that hold seminars for those seeking ongoing legal education.  These include state and local bar associations, legal groups, and various state and federal agencies.  We have discussed the importance of advanced and very specific legal seminars and how a DUI lawyer needs to keep up to date by attending them.

Attending these national legal seminars with the elite in the field is great, but being called on to instruct and present cases studies at these national elite seminars is an honor that not many lawyers can claim.  As a proud member of this highly elite faculty, I have had the honor to instruct at numerous seminars and workshops.  Here are some examples from just this past year:

This training was held in Harrisburg in September 2008 and was attended by over 20 trial attorneys from across the country.  One was from as far away as Maine.  Being well versed in the SFST’s is essential for a DUI lawyer because there are many procedures that the police must follow while administering these tests.  If they fail to do so, many times the evidence from the roadside tests get thrown out and jeopardize the ability of the Government to prove its case.

attendees of this course had already received training as SFST practitioners and were seeking training in the instructor level course (which is the highest level of certification) as recognized by the National Highway Traffic Safety Administration (NHTSA) and the International Association of Chiefs of Police (IACP).  I had the opportunity of hosting and instructing various modules of this seminar and participating in the rating systems that made sure that the attendees were indeed in line with the rigorous standards set forth in this curriculum and achieved proper certification.

This training was held in Harrisburg in June 2009 and was attended by over 30 lawyers from across the country.  I am honored to have hosted and instructed at this seminar as well.  The presenters were world renowned DUI authorities like:

This was a certification course for the attendees to be recognized as DRE’s as per the curriculum set forth by  NHTSA and  IACP.  A DRE is someone who is supposedly qualified to determine if someone is driving under the influence of a controlled substance such as Percocet, Oxycotin, Xanax, or Ambien or other prescribed drugs or an illegal substance like marijuana and heroin.  This course also included a practical session in cross examination and the total course was for 40 hours.

This is an annual course hosted by Lorman Education Services where I have often acted as the keynote speaker and moderator.  This course has been attended by Judges of Courts of Common Pleas, District Justices, Prosecutors, and Defense Attorneys. 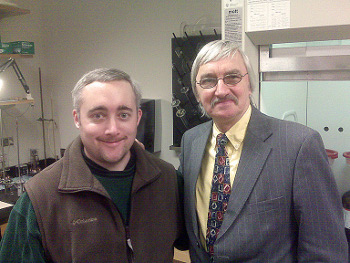 “Advanced Forensic Blood and Urine Seminar.”  It is a very high level seminar.  The faculty is a “who’s who” list of DUI, forensic, and medical experts.  Close to 300 attorneys and legal experts from all over the county and even international dignitaries like AW Jones (pictured to the right with Justin) gathered in San Diego for this extraordinary event.  There was over 46 hours of training and presentations.

I was nominated by Attorney William “Bubba” Head, the premier DUI lawyer in the country, to present a case where I successfully challenged the reported forensic Blood Alcohol Content and obtained a not guilty verdict for a client whose test showed a .34 BAC.

5. How Defend a Controlled Substances Accusation

This was a local seminar held here in Harrisburg, organized for the benefit of the Dauphin County Public Defender’s Office.  I hosted the seminar.  I instructed the attendees in how to handle a case in which the defendant is accused of drug possession and/or drug dealing.  The topics discussed included how to frame a case for presentation to a jury, solid dose drug testing, the difference between possession and possession with the intent to deliver, and drug influenced driving.

I have also been asked to speak at other lectures of a more local flavor and also to the general public.  I lectured on the topic of  “False Positives and Actual Innocence” which was a lecture to the Harrisburg Lion’s Club where I demonstrated a false positive result on a PBT simply by eating bread.  I have also been asked to lecture before the Dauphin County Bar Association on using Technology in the Courtroom.  In the past, I have served as guest crtiquer at the Penn State-Dickinson School of Law and the Central Pennsylvnaia College in the area of Jury Trial advooacacy.  I have also instructed on the Intoximeters Alco-Sensor FST Practioner and Instructor Training on various occasions.  In the past, I have been a featured Special Guest Presenter at the Pennsylvania State Police Academy.

The “take home” message here is very simple.  There is a big difference between a teacher and a student.  Who would you trust when your life, freedom, and your right to drive depend on it?

3 responses to “How to Find a DUI Lawyer in Pennsylvania: Lectures Presented about DUI”