The National College for DUI Defense (NCDD) just concluded its 2012 Summer Session which is its flagship seminar.  Every year it is held at the facility of Harvard Law School in Cambridge, MA. It is not officially affiliated with Harvard.  The Summer Session is attended by the very best DUI attorneys in the country and there is always a lot to learn.  As in years past, all of the attorneys at The McShane Firm attended the seminar.

I will always remember the 2012 Summer Session because of the various honors I was conferred. This year I:

The Dean’s award was conferred:

In Recognition of his great progress, dedication, leadership qualities and unequaled desire to expand and share legal knowledge with his brothers and sisters of the NCDD, I hereby award to:

We expect him to continue his pursuit of excellence in the future.

This is a huge honor for me and I would also like to thank all of those who have supported me throughout the years.

A big thank you to my beautiful daughter (and best friend) Mia and my parents.  Without their love and support I could never achieve what I have. My parents taught me how to be a good person. My daughter continues to teach me importance of being a good teacher. I try every day to honor them with the way I conduct myself.

My office staff and colleagues here at the firm make me look so good. I am so appreciative for their daily hard work and dedication. They, like me, dedicate most of our waking hours to make a true difference in the lives of good people and help keep families together.

I am also appreciative and thankful to all of the experts and attorneys who have taught me and helped me teach others. The list is long. They are the pioneers in whose footsteps I follow.

Also thanks to all of my colleagues at the NCDD all across the United States.  You inspire me to be better and to keep teaching.

Thank you to all of my family at The McShane Firm who have worked so hard over the years to make this the best DUI and criminal defense firm in Pennsylvania and beyond.  You are the best team I could ever dream of.

And last, but not least, to all of the readers of Pennsylvania DUI blog.  Your insightful questions and comments encourage me and let me know that I am helping people, which is the greatest feeling of all. 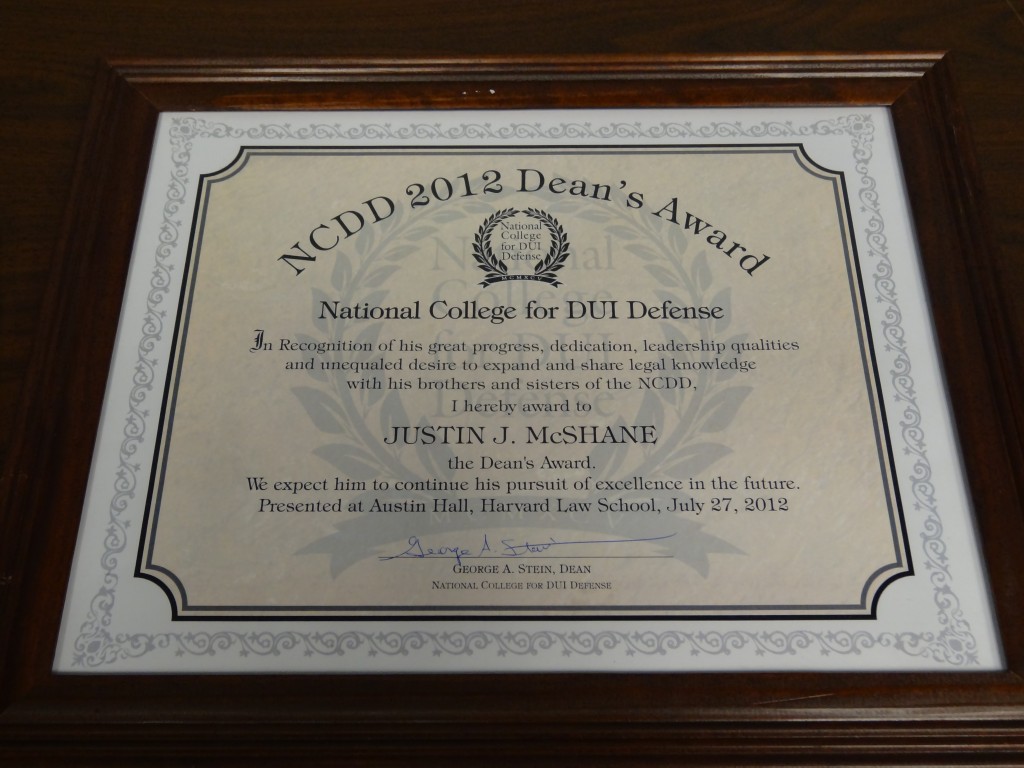 I am proud of this achievement and  humbled. Whenever I am publicly recognized, I come to think about a loose translation of the Latin phrase Sic transit gloria mundi which literally means “Thus passes the glory of the world” or more popularly heard as “All glory is fleeting.”

At the height of the Roman Empire, when a general or great warrior did something of great value to the Empire, he was allowed a “triumph.” This triumph was an ornate parade though the streets of Rome. Caesar commanded that a slave was required to stand next to the general in his chariot continuously whispering into his ear “All glory is fleeting.” And it is true as perhaps it should be. Glory is fleeting so that we do not become complacent in ourselves and so that society is continually infused with new people with better ideas or more heroic deeds that help us all. So while I am honored, thankful and proud, I am humbled because I know “all glory is fleeting.”

While this is a great achievement, I don’t see this as the pinnacle of my career. I still see I large mountain in front of me that I have to climb.  There is still injustice being done to innocent citizens in Pennsylvania and all over this great nation that are being pressed to accept draconian consequences.  There are still people being convicted based on false evidence and bad science. It is goal, my mission, and my obsession to keep on fighting the good fight.

Will you join me?